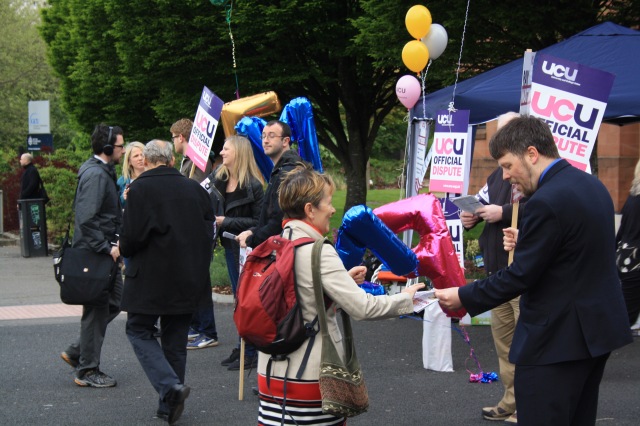 Although there was no doubt about the serious issues at stake, there was a carnival atmosphere on the picket line at GCU today, with inflatable balloons representing the gender pay gap, cupcakes, music, plus our usual gazebo, and of course, our incredibly talented members. 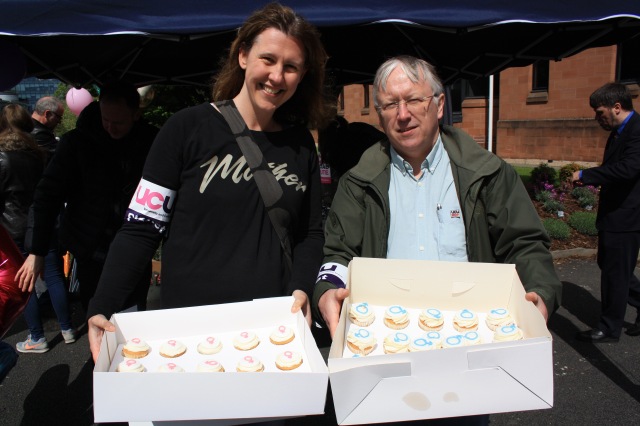 Cupcakes comparison (larger ones for males, smaller for females – like our salaries)

In what was acknowledged as the best turn out in recent disputes, all the gates were covered, including incoming vehicles whose drivers were spoken to. 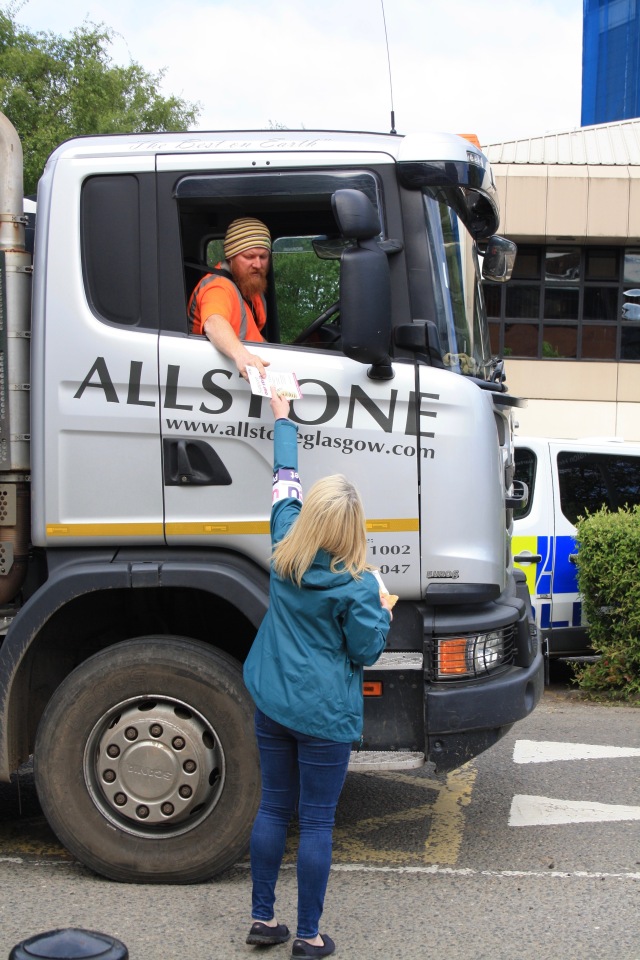 Making the point on the gender pay gap

We got tremendous support from other unions, including speakers at our gate side rally, and also support from the officers of the Students Association. 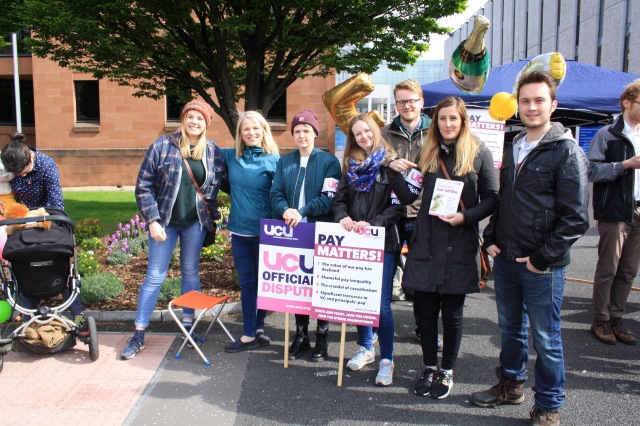 Members of the UCU Postgrad community were also out arguing for the end of casualised contracts. 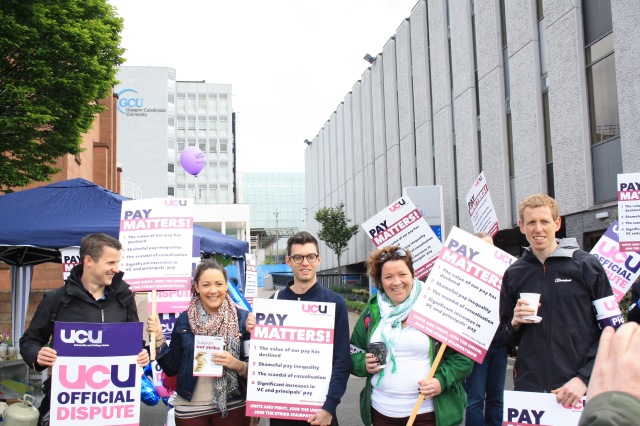 A growing number of postgrads have joined UCU recently at GCU

A member of the GCU security team was sent down to speak to us following a ‘phone call from the Britannia Building’ informing us that  “if we didn’t turn the music down ‘the polis would be called.”

Fortunately better sense prevailed and no polis appeared, (but with  that the chance for a brilliant photo-shoot also disappeared).

More welcome on the picket line however, was one of the chefs from the kitchen delivering hot rolls commissioned and paid for by Unison@GCU. Unite@GCU also helped raise the spirits by a hefty donation that ensured the picketers had adequate supplies of coffee and other necessities throughout the day. 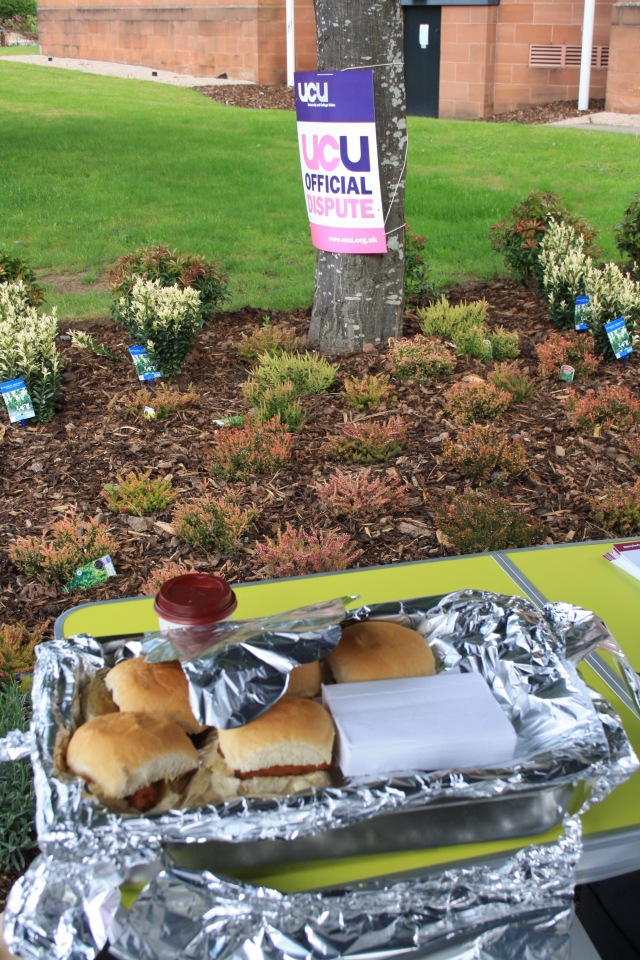 Passing cars signalled their support and were acknowledged by our picketers

and following the end of activities at noon, there was a sizeable contingent from GCU UCU who joined staff from Glasgow university, Strathclyde, College of Art, and UWS. Speakers at the rally were myself for UCU Scotland, Helen Martin from the STUC, Rob Henthorne from NUS Scotland, Anna Ritchie-Allan from Close the Gap. Messages of support were also sent from Unite, EIS and others.

A well attended rally at Adelaides discussed the issues

A new generation of pickets has been born….. 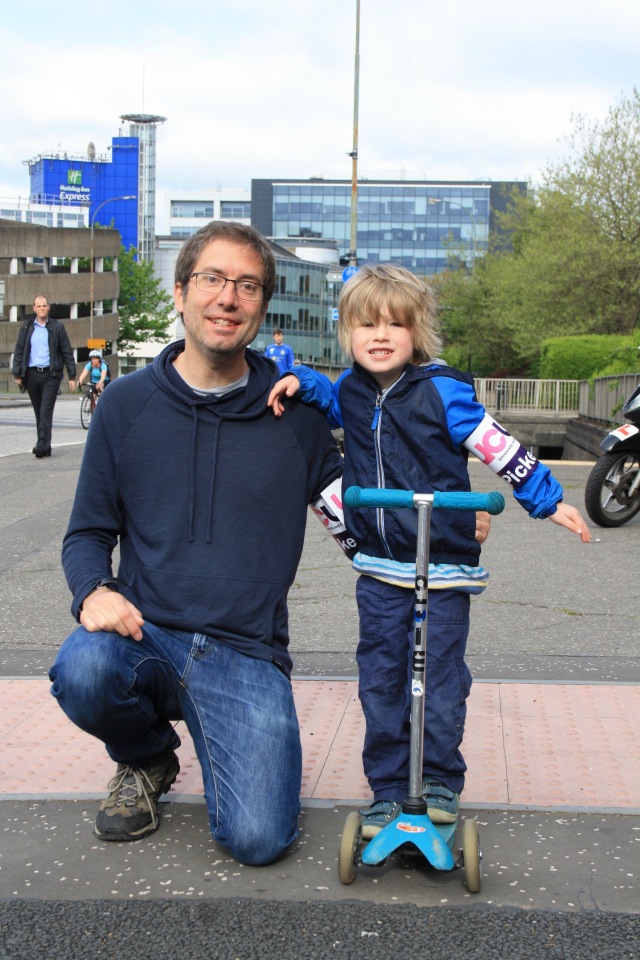 Scooter picket was a prominent supporter

We needed more chairs at Adelaide 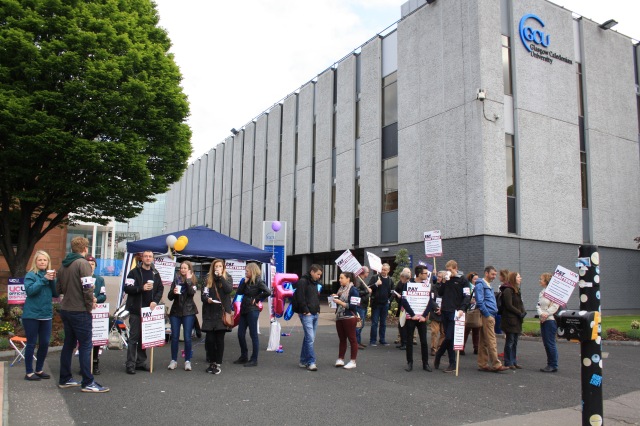 The weather kept up

The sun even came out for us – and scooters

And it was a great atmosphere all round.

In the next couple of days, a fuller photo record will be put up on our Flickr site