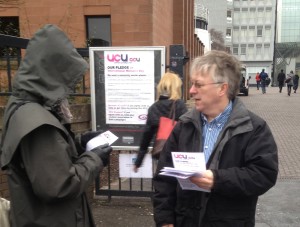 Douglas Chalmers, local President of the UCU@GCU announced he felt honoured to be elected as Scottish vice president of the UCU in their current elections. Receiving almost twice as many votes as his opponent in the election, Douglas said “The union in Scotland and in the rest of the UK, faces some difficult times ahead, but there’s never been a need for a stronger UCU, due to the increase in managerialism in our universities.

We have a real vision for transforming Higher Education in Scotland, and are determined to do this – working with our sister unions to ensure a positive future for all in the sector. Our branch is working on an increasing range of issues of interest and concern for our members and looks forward to broadening our work over the next period at GCU. If I was asked for a theme for our work in the near future its going to be –  The UCU, it’s not ‘Business as usual.’

Blog site for the latest UCU union news
View all posts by unionadmin →
This entry was posted in UCU, Uncategorized and tagged Douglas Chalmers, GCU Management. Bookmark the permalink.