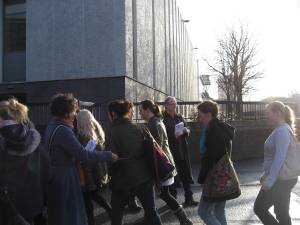 Glasgow Caledonian University’s branch of the UCU celebrated International Women’s Day by releasing a new poster (downloadable here), and a new leaflet (downloadable here: side 1, side 2) pledging to fight for a better deal on casualisation and part time workers and to ensure women’s academic work is given equal value to the work of male academics. The leaflet also pledged to end the penalisation of women’s research and career prospects brought about by enforced career breaks through maternity leave. Pointing out that due to the work of Trade Unionists over the years at Glasgow Caledonian,  GCU’s position in terms of structure and promotion for women is better than average in the HE sector, the leaflet goes on to argue it could be better still in many areas. Interestingly it appears that the majority of the UCU membership at GCU are women.
Staff and students were leafleted in the morning and at lunchtime while a message of support was sent to a victimised EIS/FELA colleague at Angus College, suspended for complaining about the sexist nature of the college’s IWD celebration.
Meanwhile, the unions represented on this caledonianunion blog would like to congratulate the work done by postgraduate Journalism students at GCU commemorating International Women’s Day with students and union members featured. You can catch this 7 minute video here – it’s brilliant.

Blog site for the latest UCU union news
View all posts by unionadmin →
This entry was posted in UCU and tagged UCU, Women. Bookmark the permalink.